Discover the differences between marine rays and manta rays

Although sea rays and manta rays are related, they have characteristics that differentiate them, but first we will tell you about their coincidences.

Both are species of elasmobranchs and belong to the superorder Batoidea in which sawfishes are also found. Both have a skeleton made of flexible cartilage instead of bone. Batoids can live in slightly salty bays. Bottom-dwelling batoids breathe through their spiracles rather than their mouths, as many fish do, and draw water through their gills.

Next, we are going to tell you what are the peculiarities that characterize each one, keep reading and know their main differences!

The rajiformes are an order of cartilaginous fish that, as we mentioned, are closely related to sharks, it could be said that they are like flattened sharks.

Sea rays or stingrays are characterized by having thin, whip-like tails with a poisonous stinger located in the first third of the tail.

They inhabit all the world's oceans, from the Arctic to the Antarctic, however, there are some species that move in freshwater rivers and estuaries.

In the Marine Park of Puerto Morelos, which belongs to the mesomerican reef, there are different species of marine rays. One of the most beautiful ones is the Eagle Ray, which every winter visits our shores. 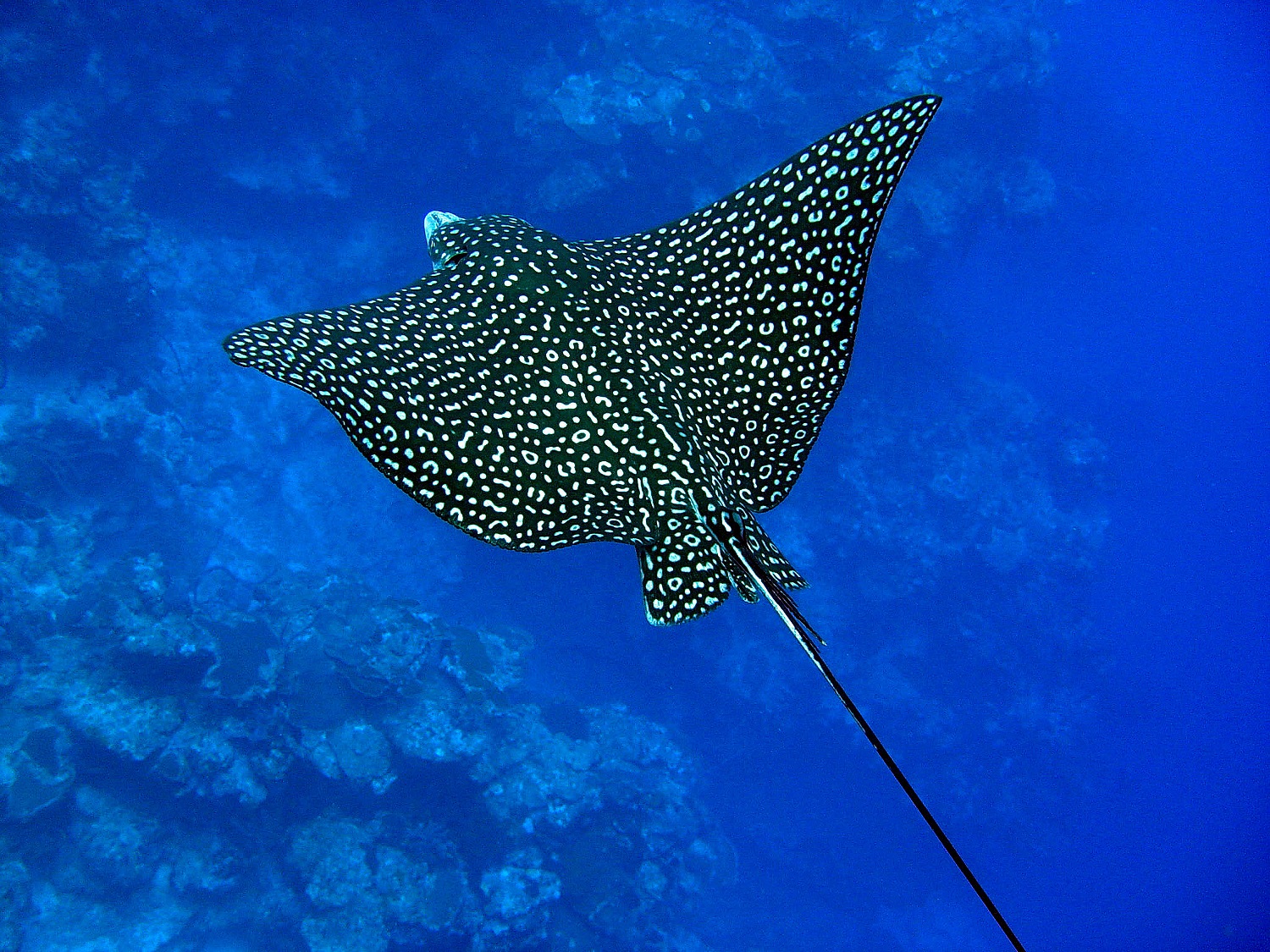 They are recognized in the oceans for their large size and majestic shape. Manta rays belong to the Mobula genus and there are two recognized species: Manta birostris and Manta alfredi.

They can live more than 50 years; They are also cartilaginous fish, but they do not have a stinger in their tail.

They are pelagic, inhabiting tropical and subtropical waters of all major world oceans.

One of the most amazing features of manta rays is that they have a large brain that they can keep warm even when swimming in colder than usual water. You can spot these beautiful creatures while swiming with the Whale Shark in Cancun too! 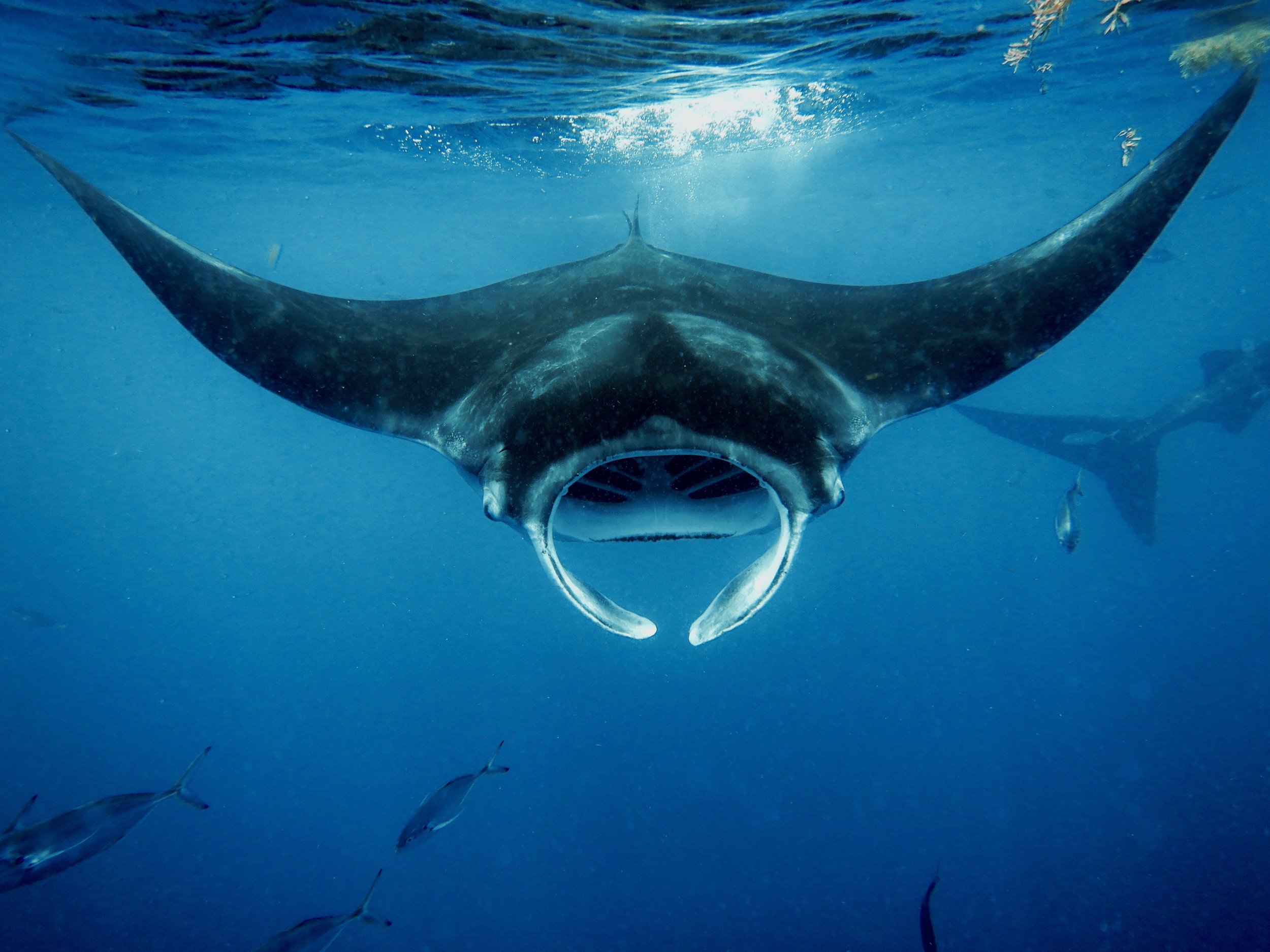 Size
The giant manta rays can measure more than five meters and weigh more than a thousand kilos, while the marine rays are smaller, only some reach more than two meters.

Physical form
Although they are very similar, manta rays have characteristic cephalic fins located on both sides of their mouths, their eyes are on the sides of their broad heads, they have long, triangular pectoral fins, and their width is approximately twice the length of their body. .

The marine rays, on the other hand, usually have a diamond-shaped body, this shape is composed of pectoral fins attached to its head, the eyes usually peek out from its dorsal side and the mouth, nostrils and gill slits are located on its belly.

Mouth and food
This is one of the main differences, manta rays are filter feeders, they eat large amounts of plankton so their mouth is in the cranial area, facing forward. So can actually spot them near whale sharks as they have the same diet.

The rays, on the other hand, maintain a carnivorous diet, their mouth is located on the belly and they have jaws that help them to crush crustaceans, molluscs and the occasional fish that they catch from the seabed.

Swimming
The rays rest and swim close to the seabed, undulating their fins to stir up the sand and partially burying their bodies in order to camouflage themselves to avoid predators.

What did you think of this article? Share your opinion on our social networks and, if you love the marine world, you may also be interested in: “Caribbean Reef Sea Fish”.