There is plenty of fish in the sea, but which ones can you find in the Caribbean?

Snorkeling is a great way to experience swiming with thouse little fishes that you normally watch on tv. Even more fun is when you start to identify the fish you see; calling out corals and naming nudibranchs along your dive is when you really begin to feel the connection you have with nature.

The Caribbean Sea is bursting with thousands of colorful life forms, from fish to corals to invertebrates to plants — you can literally never see the same sights twice. Check out our list of tropical fish that are commonly spotted in the Caribbean, and see how good your memory is when you move beyond the pictures of fish and into their world.

This is one of our favorite caribbean fishes. They are so colorfull and the external surface of their jaw bones, form a parrot-like beak is definitely eye catching.
Most parrotfish species are herbivores, but larger species as the ones found in our carribean reefs, feed extensively on living coral (polyps). Nevertheless, when they do eat coral polyps, localized coral death can occur.

Their feeding activity is important for the production and distribution of coral sands in the reef biome, and can prevent algal overgrowth of the reef structure. The teeth grow continuously, replacing material worn away by feeding. After they digest the edible portions from the rock, they excrete it as sand, helping create small islands and the sandy beaches. The humphead parrotfish can produce 90 kg (200 lb) of sand each year.

On Caribbean coral reefs, parrotfish are also important consumers of sponges. An indirect effect of parrotfish grazing on sponges is the protection of reef-building corals that would otherwise be overgrown by fast-growing sponge species.

Barracudas reside near the top of the water and near coral reefs and sea grasses. Barracudas are snake-like in appearance, with prominent, sharp-edged, fang-like teeth, much like piranha, all of different sizes, set in sockets of their large jaws.

Barracudas are ferocious, opportunistic predators, relying on surprise and short bursts of speed, up to 27 mph (43 km/h), to overtake their prey. Barracudas prey primarily on fish (which may include some as large as themselves). They kill and consume larger prey by tearing chunks out of their prey. Barracuda species are often seen competing against mackerel, needle fish and sometimes even dolphins for prey.

Swimmers have reported been bitten by barracudas, but such incidents are rare and possibly caused by poor visibility. Barracudas may mistake things that glint and shine for prey. So we better recomend you not to wear anything too shiny.

This caribbean fish is white with a yellow top. It has 5 vertical stripes which are black. A faint sixth stripe might be present on the caudal peduncle. Adult males have a more bluish coloration and its stripes are less visible. There is a dark spot around its pectoral fin.

They feed upon the larvae of invertebrates, zooplankton, smaller fish, crustaceans, and various species of algae.

Groupers are teleosts, typically having a stout body and a large mouth. They are not built for long-distance, fast swimming. They can be quite large, and lengths over a meter and the largest is the Atlantic goliath grouper (Epinephelus itajara) which has been weighed at 399 kilograms (880 pounds) and a length of 2.43 m (7 ft), though in such a large group, species vary considerably. They swallow prey rather than biting pieces off it. They do not have many teeth on the edges of their jaws, but they have heavy crushing tooth plates inside the pharynx. They habitually eat fish, octopuses, and crustaceans. 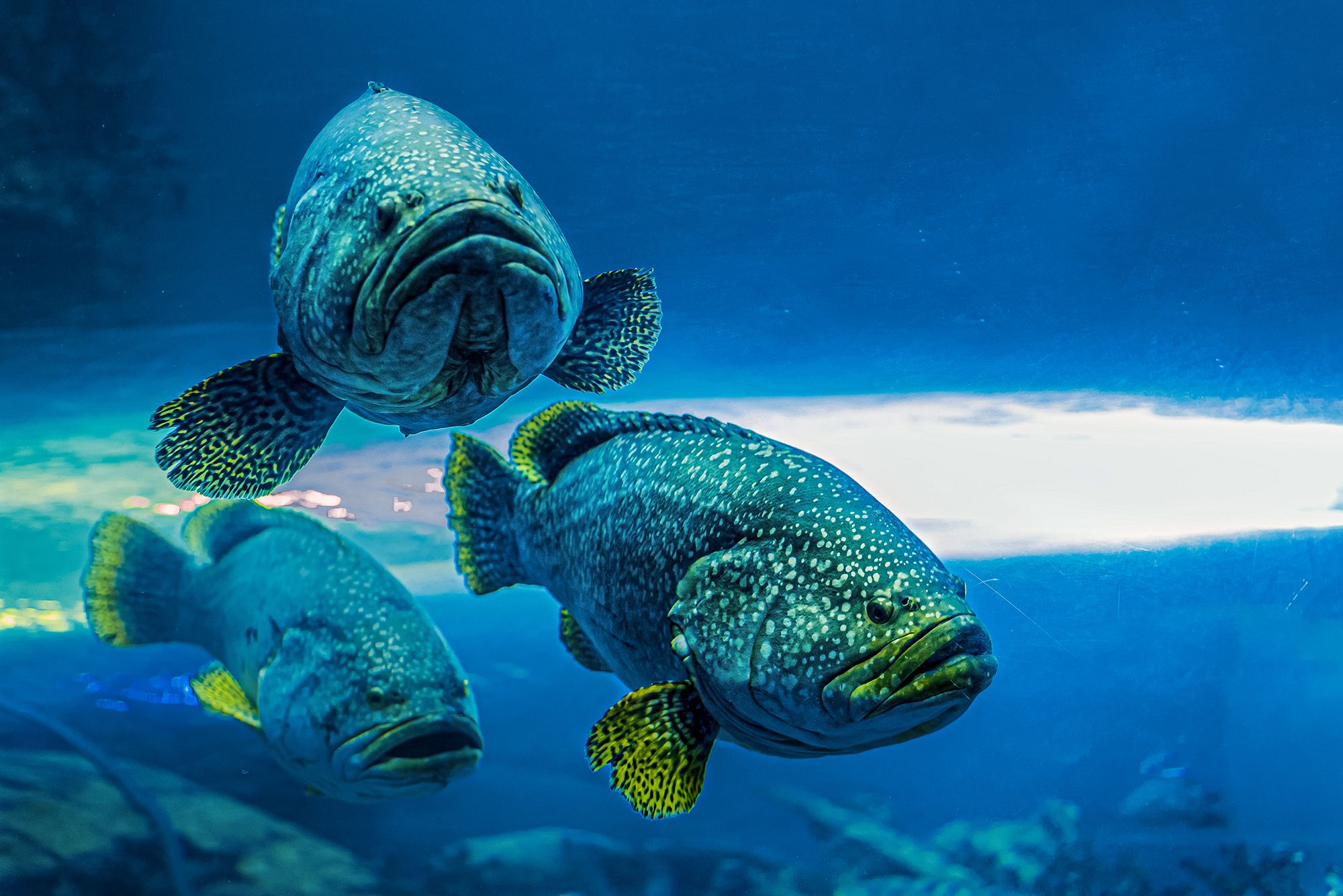 Their mouths and gills form a powerful vacuum which pulls their prey in from a distance. They also use their mouths to dig into sand to form their shelters under big rocks, jetting it out through their gills.

Research indicates roving coralgroupers (Plectropomus pessuliferus) sometimes cooperate with giant morays in hunting. Groupers are also one of the only animals that eat invasive red lionfish.

Also called firefish, turkeyfish, tastyfish, or butterfly-cod, it is characterized by conspicuous warning coloration with red, white, creamy, or black bands, showy pectoral fins, and venomous, spiky fin rays. This fishes are recent and significant invasive species in the Caribbean.

The red lionfish is found off the East Coast and Gulf Coast of the United States and in the Caribbean Sea, and was likely first introduced off the Florida coast by the early to mid-1990s.This introduction may have occurred in 1992 when Hurricane Andrew destroyed an aquarium in southern Florida, releasing six lionfish into Biscayne Bay.

The lionfish may also have been purposely discarded by unsatisfied aquarium enthusiasts.This is in part because lionfish require an experienced aquarist, but are often sold to novices who find their care too difficult. Population densities continue to increase in the invaded areas, resulting in a population boom of up to 700% in some areas between 2004 and 2008.

The lionfish invasion is considered to be one of the most serious recent threats to Caribbean and Florida coral reef ecosystems. To help address the pervasive problem, in 2015, the NOAA partnered with the Gulf and Caribbean Fisheries Institute to set up a lionfish portal to provide scientifically accurate information on the invasion and its impacts.

Have a look to the following chart with more info species of caribbean fishes so the next time you do your snorkeling tour with us, you will recognize more than one. Cheers! 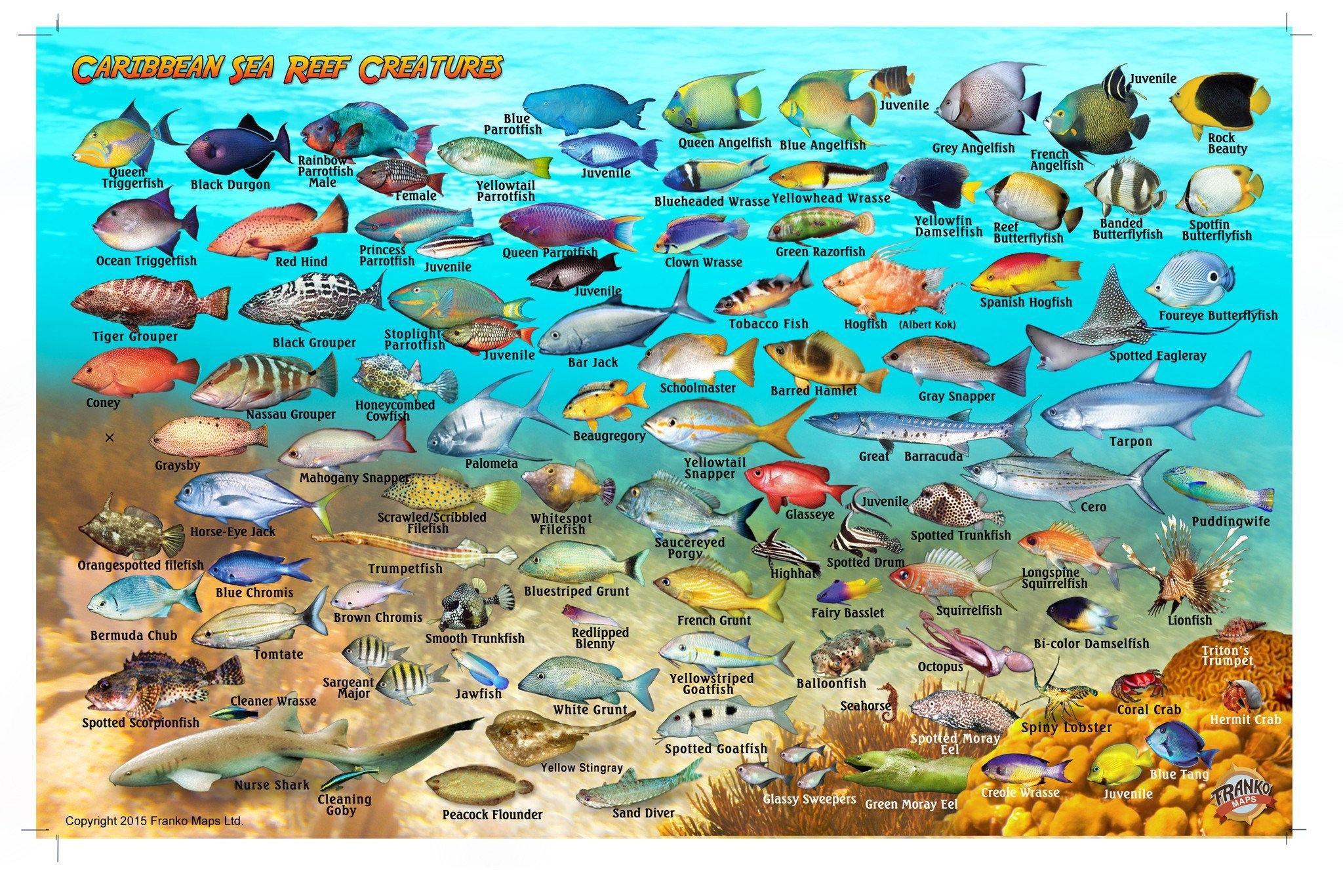