Types of turtles that you can find in the Mexican Caribbean

7 of the 8 types of sea turtles that exist in the world, reach mexican coasts. México is truly fortunate to have so much biodiversity. It is enough to go snorkeling at a beach like Akumal to find a handful of beautiful turtles swimming around.

In this brief guide we give you the main characteristics as well as some curious facts about the types of turtles that come to the coasts of Quintana Roo, so that the next time you go on a snorkeling tour and you find one of these fantastic animals, you can tell what species you are encountering. 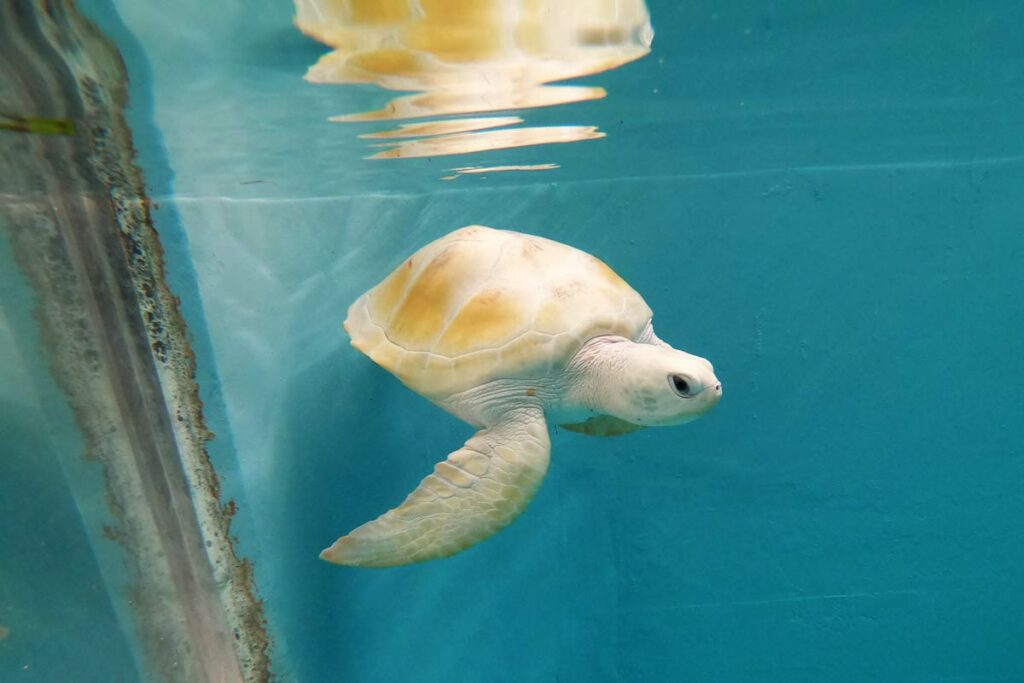 There are 4 types of sea turtles in Quintana Roo

The state of Quintana Roo (particularly the northern zone) is the only region of the country where four species of turtles arrive: green (or white), hawksbill, loggerhead and leatherback.

Read on to learn more about these types of turtles:

The Green Sea Turtle is the only one of the 8 types of sea turtle that exists that has been seen sunbathing out of the water. It is large in size, its shell is oval in shape and with age it becomes more flattened.

It is called a Green Turtle because its body fat is greenish, however its body color is variable. Hatchlings are dark with white edging and belly (some people call it a 'white turtle' for this). Shell of juveniles reddish brown to olive green; As adults they turn dark brown with patterns of spots and rays of various shades, with a yellowish belly. 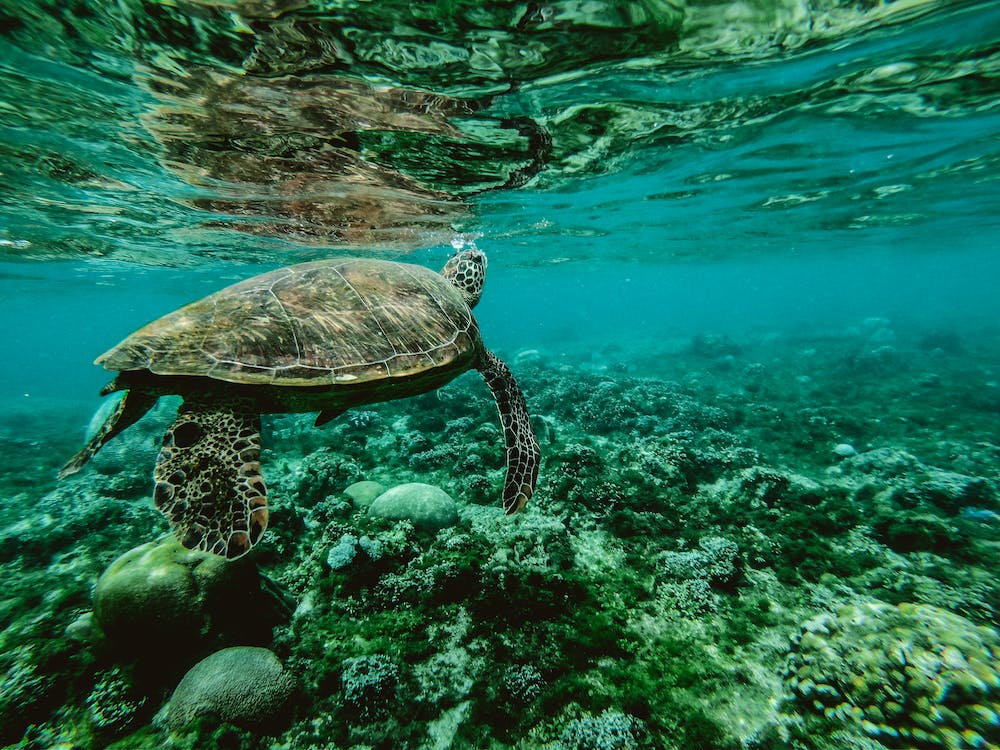 The Green Turtle can be found in almost all oceans, where the temperature does not drop below 20°C. They don't love the cold! The males never leave the sea and the females go out to spawn on different beaches around the world.

In Mexico, in addition to being found in Quintana Roo, they reach the coasts of Baja California, and from Sinaloa to Chiapas, with greater abundance in Michoacán. On the Atlantic side, they nest in Tamaulipas, Veracruz, Campeche and Yucatán.

This little girl lives between coastal areas and the open sea. When they are hatchlings they live in the open sea, and the juveniles and adults live in the neritic zone, such as the coral reef, reef bed, sea grasslands (like the ones you find in Akumal), etc.

When it is a juvenile its shell is heart-shaped and as it matures it becomes longer. The carapace edge plates are pointed giving it a serrated appearance, except in very old individuals. The shape of its head tapers towards the tip and the jaw has the appearance of a strong, hooked, sharp-edged bird's beak, giving it its English name: hawksbill.

This turtle is known worldwide for the appearance of its shell: dark brown with reddish tones and an amber background. It has patterns of striations, stripes, and spots. Its body has dark brown spots on a light-colored background. The ventral area is more creamy yellow to white with some dark spots.

They are medium in size compared to the other types of sea turtles that arrive in the Mexican Caribbean, as they measure between 62 cm and 1.14 m long (average 87 cm). When they are adults they weigh an average of 80 kg. In Mexico, female hawksbill turtles that have come to lay their eggs in the Yucatan Peninsula have an average length of the carapace curvature of 90.52 cm and an average weight of 73 kg.

The Hawksbill Sea Turtle lives in tropical and subtropical seas around the world. It is estimated that it spawns on beaches in 60 different countries, most of which are low-density nests. In our country it nests mainly in the states of Veracruz, Campeche, Yucatán and Quintana Roo. There are no significant nesting sites in the Mexican Pacific, but it is occasionally recorded on beaches and islands in Michoacán, Jalisco, Sinaloa and Oaxaca.

It is considered that the Hawksbill Turtle is the species of sea turtle that likes to stay near the coasts and is primarily tropical. Prefers particularly clear waters with rocky bottoms with abundant food.

It is a solitary turtle, except during the reproductive season, when it can form small groups to spawn. It is believed that in the wild they can live between 30 and 50 years.

Of the types of hard-shelled sea turtles, the loggerhead is the largest of all. Its shell is slightly heart-shaped, and adults usually have barnacles and algae on top. Unlike the rest of the types of turtles that come to the Mexican Caribbean, which have rather small heads, the loggerhead has a relatively large head compared to its body.

When they are young they have lighter and brighter colors, with reddish brown dominating. The carapace of adults is reddish brown with shades of olive green.

The loggerhead turtle is found in coastal waters of the world's tropical and subtropical seas. In Mexico it is possible to find them to the southwest of Baja California and within the Gulf of California, as well as in the Mexican Caribbean in the states of Quintana Roo and to a lesser extent in Campeche and Yucatán; occasionally it reaches the beaches of Veracruz and Tabasco.

There is a record for this species, of 4,828 km in a migratory route.

In a dive it can swim for more than 20 minutes, but the impressive thing is that, if it is at rest, it can last up to hours on the seabed! It is estimated that they can live up to 62 years in the wild; and in captivity they have been recorded for 33 years.

The Leatherback is the world's largest living sea turtle. Its body is fusiform and flattened; its large carapace is smooth with seven rows of dorsal crests and five ventral ones, which run from head to tail; the head is relatively small.

The curious thing is that the shell of this type of turtle is not strong like the others. Something that also stands out from its different shell is that, due to its shape, the leatherback cannot retract its flippers, and its tail and head only minimally. The thick layer of skin that forms its 'shell' contains fat, which makes it a thermal insulator that allows it to remain for long periods of time in temperate and even cold waters (unlike the other types of turtles we saw, which prefer warm tropical waters). Its large size also allows it to lose heat very slowly, in an effect called "gigantothermia".

It is dark in color, almost black, the edges of its fins can be whitish, and it has a whitish mottling all over its body. Its head and jaw are mottled with white, sometimes slightly pink, and the female has a characteristic pink spot on the crown of the head.

Leatherback turtles from the Mexican Pacific range from 1.30 to 2.56 m in total length; with an average of 1.46 m. Its weight can reach just over a ton, but the average is 394 kg. The heaviest recorded leatherback in the literature weighed 916 kg! This animal was found off the coast of Wales, England. However, it is 153 kg less than the maximum registered in Mexico. Unfortunately, individuals of such large sizes and weights are already very rare.

The Leatherback Turtle is a species that can be found almost everywhere in the world, depending on the time of year, thanks to the long distances they cover in their migrations and to the fact that they resist low temperatures better than their companions.

She is a strong and fast swimmer and spends most of her life alone in the open sea. It is tremendously adaptable, since it has been found submerged up to 1,230 m deep and has also been seen eating in coastal waters. In captivity, they live up to 30 years.

In the 80's, 91,000 females were recorded on Mexican beaches; which made Mexico the main nesting site for leatherback turtles in the world. However, since then there has been a dramatic decline in the number of nests of the species in all populations.

One thing these 4 types of turtles have in common is that they all enjoy warm, calm beaches, abundant with sea grass and protected by reefs: the exact description of Akumal Bay! This beautiful beach is so well known for its population of sea turtles that many people now simply refer to it as “turtle bay”.

The beautiful sea turtles found on this beach are protected by the national authorities, giving the already relaxed turtles a lot of security and peace of mind. This makes the experience of snorkeling with them even more magical since they will transmit all their peace and harmony with their surroundings.

It is one thing to read about this incredible beings, but seeing them in the flesh and living with them is something that is not forgotten. The best thing is that this is an ideal activity to do with children or older adults, since the crystal clear and shallow water of Akumal makes snorkeling there a simple and pleasant experience.

Aquaworld's Akumal Turtle Snorkeling Tour lets you do this, and more! The fun doesn't end after swimming with the turtles; You can also swim among the stalactites and stalagmites of some magical cenotes in the Riviera Maya, as well as explore a dry cenote on foot.