Fringing reefs grow close to shore around islands and continents. They are separated from the coast by narrow, shallow lagoons. Fringing reefs are the most common type of reef.

Barrier reefs also run parallel to the shore, but are separated by deeper and wider lagoons. At their shallowest points, they can reach the surface of the water forming a "barrier" to navigation.

Atolls are rings of coral that create protected lagoons and are usually located in the middle of the sea. Atolls generally form when islands surrounded by fringing reefs sink into the sea or when the sea level rises around them. 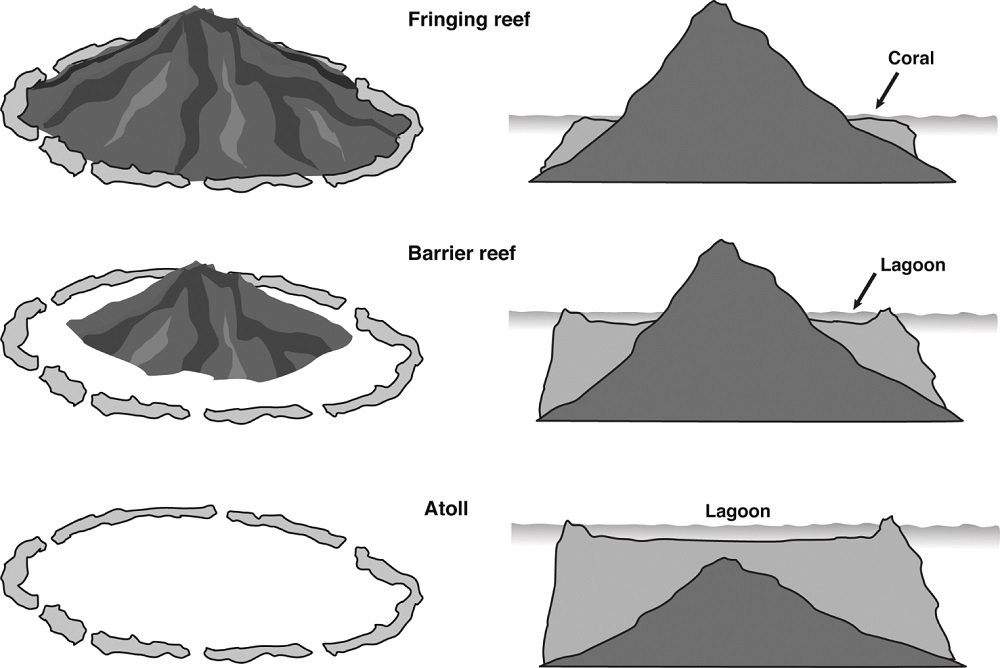 Distribution
The reefs are found within a band that forms between the Tropic of Cancer and the Tropic of Capricorn and generally on the eastern side of the continents. This is because the large river systems flow into the west coasts of the continents, dragging sediments that cloud the waters. In Mexico, the reefs can be regionalized into three zones: The Pacific coast that includes the states of Baja California, Baja California Sur, Sonora, Sinaloa, Nayarit, Colima, Jalisco, Michoacán, Guerrero and Oaxaca). The coasts of Veracruz and Campeche, and finally, the eastern coast of the Yucatan Peninsula, which corresponds from Isla Contoy, Xcalak, to Banco Chinchorro. In this last area, there is a part of the second largest barrier reef in the world, the "Mesoamerican reef". The estimated area occupied by reefs in the country is approximately 1,780 square kilometers. Commonly, reefs can exist from a few centimeters below the surface to 50 meters deep.

Climate
In general, in Mexican waters the climate is subtropical to tropical, with an average annual temperature of 26° to 28°C. Conditions for optimal growth in coral reefs are temperature between 22° to 28°C, high light intensity, and low nutrient concentration. 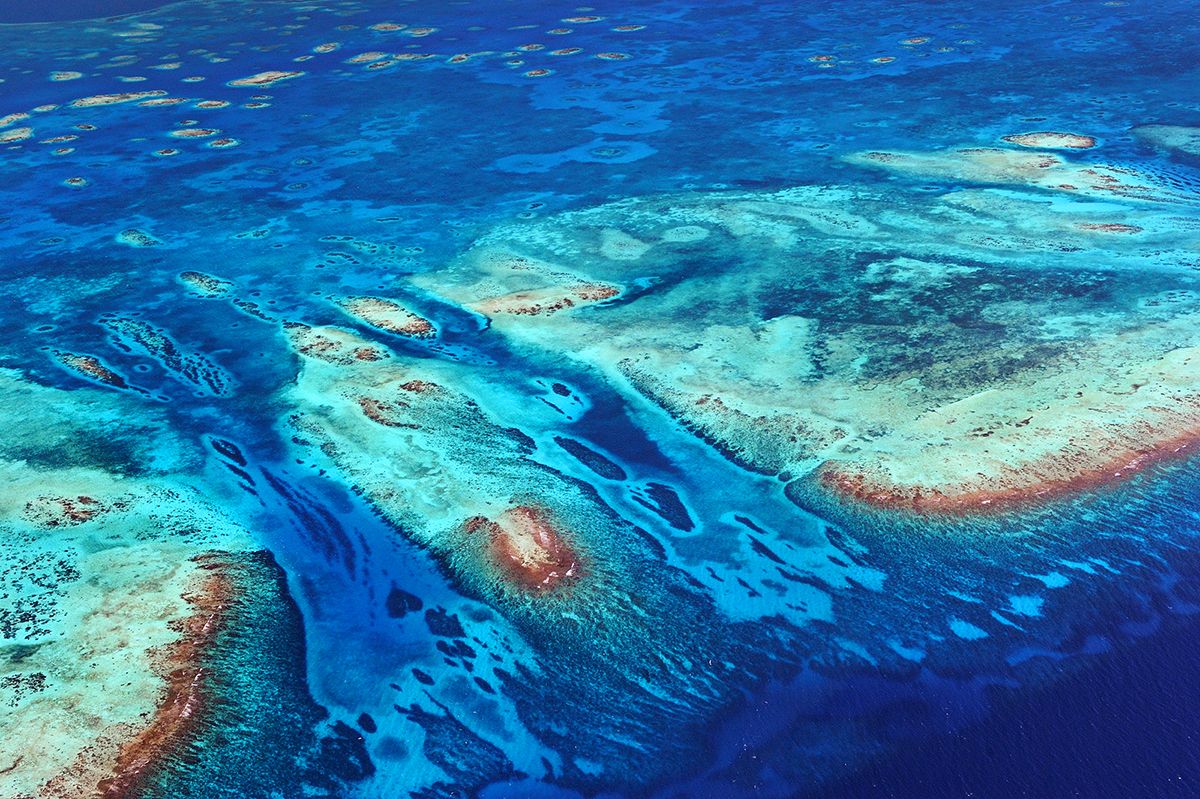 Reef-forming corals are known as hard or hermatypic corals (from the Greek, hermai, stone pillar and typical, characteristic of) and they are the only ones that carry out the symbiotic relationship with zooxanthellae. Non-reef-building corals are known as soft or ahermatypic corals. Unlike hard corals, the latter do not have symbiotic relationships and their skeleton is internal. In Mexico, the number of reef-building corals is approximately 60 species, between 8 and 10% of all known species in the world. The area with the greatest richness of hard coral species is the Caribbean and the Gulf of Mexico, where around 45 to 60 species live. In the Pacific, a maximum of 17 species have been recorded. Soft corals in Mexico number approximately 50 species.

In order for these small organisms to build the large reefs that are currently known, the polyps use some substances dissolved in the sea, transforming them into calcium carbonate, a compound from which corals are made. The polyps secrete their own calcium carbonate skeleton aided by small unicellular algae called zooxanthellae (from the Greek zion, animal, and xanthos, yellow). With them, the polyps have a symbiotic relationship (relationship that benefits organisms of different species), algae-coral, where the algae deposit calcium carbonate much faster, and provide substances produced by photosynthesis to the coral. Corals in turn provide substrate for algae, which are one of the most important groups in reefs due to the functions they perform as food, oxygen production, among others. Green algae, red algae, and brown or brown algae live in these ecosystems. In addition to corals, a large number of species such as isopods, amphipods, polychaetes, anemones, sponges, molluscs, crustaceans, large numbers of fish of different shapes and sizes live in the reefs. 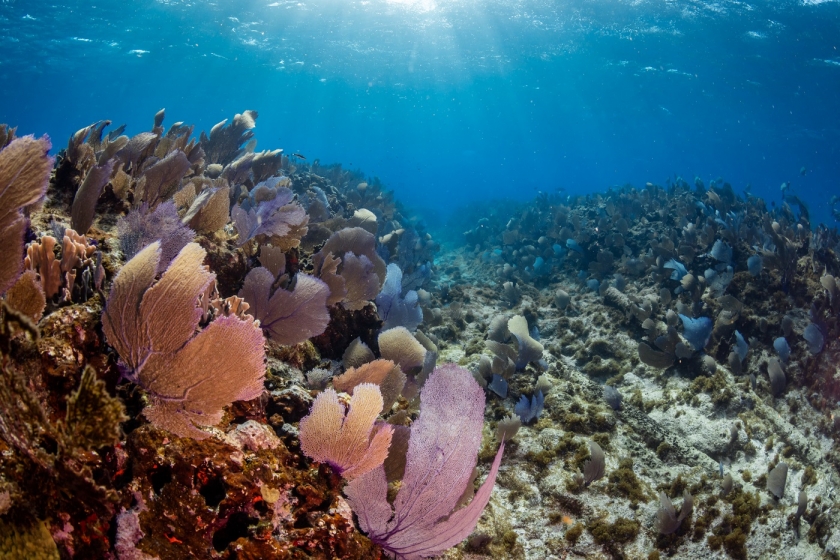 Environmental services
Coral reefs are places of great ecological importance and are known as critical habitats due to their diversity of functions. They play a very important role in coastal dynamics by preventing erosion and reducing the force of waves, in addition to constituting the most effective protection structure against the strong effects of tropical storms and hurricanes. All these organisms play a very important role in the ecosystem, some as primary producers, reef builders, filter feeders and predators. The reefs are places of breeding, refuge, feeding and reproduction of many species of invertebrates and vertebrates, mainly of commercial species, providing food to a large part of the Mexican population.

Impacts and threats
The reefs are affected by the extraction or overexploitation of coralline material and other organisms that make up the reef, the overcollection of ornamental species such as black coral (Antipathes sp.), fish, anemones, and other invertebrates such as aquarium animals; the construction of infrastructures such as ports, marinas and docks for navigation, the extraction of construction material (sand and limestone) and the dredging of ports and canals; unregulated or controlled tourist activities; the contamination of pesticides, fertilizers and garbage, coming from agricultural and urban areas, together with the sedimentation resulting from the erosion of areas with poor forest management. The sediment along with the garbage and pesticides suffocate the small coral polyps causing their death.

The increase in temperature in the sea results in the "bleaching" of corals. This phenomenon occurs when the symbiotic algae die or are expelled from the polyps due to a sudden increase in temperature, solar radiation, high concentration of sediments, nutrients and different diseases. Coral bleaching has increased. In the last 30 years, several drastic events of this phenomenon have been recorded (1983, 1987, 1991, 1998, 2002 and 2005).

Conservation
More than 10% of the world's reefs are seriously damaged. In 1994, an International Reef Initiative (ICRI) was created, supported by different governments and international organizations. Its objective is to implement programs at the local, national and international level on the conservation, restoration and sustainable use of reefs.

There are currently 13 protected natural areas (ANP) that include areas with reefs, nine of them are in the Gulf of Mexico and the Caribbean Sea and the rest are in the Pacific and the Gulf of California. Also within the framework of the Convention on Important Wetlands "RAMSAR" areas with coral reefs have been included. Of the 51 Mexican sites registered within the convention, 11 have reefs.